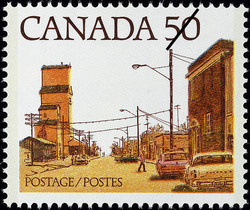 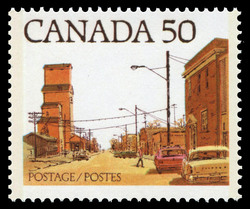 The Canadian 50-cent Prairie Street Scene stamp has a unique story to tell. It was issued by two separate printing companies, and it contains a few fascinating varieties.

First off, when this stamp was initially released, the postal service did not publicize the location of the prairie town. For a while, it was unknown, but enthusiastic collectors eventually concluded that the small town pictured on this stamp was actually Austin, Manitoba. The second set of the Prairie Street Scene stamps was released on December 13, 1978 by the Canadian Bank Note Company (CB). CB used another printing technique call lithography. Lithography utilizes the immiscibility of oil-based inks and water by dampening the printing plate with water and forcing the ink to stick on the dry services of the plate.

Determining the printer of a Prairie Street Scene stamp is fairly simple. Since both printing companies used distinctive printing methods, you can easily see the difference by performing a side-by-side comparison. A photogravure stamp will have a slightly fuzzy look, while a lithography stamp will have a stronger emergence of colour. The most notable difference, however, is the placement of the hidden date:

BNAB placed the date in the door of the grain elevator. CB concealed the date on the license plate of the car in the bottom, right-hand corner of the stamp. In the panes printed by BNAB, stamp 5 (row 1, column 5) has a small red dot above the 5. This anomaly occurred on roughly half of the panes that were printed. Thus, 1 in 100 of the stamps printed by BNAB has this red dot, which means there are only 86,500 in existence.

In the panes printed by CB, all five stamps in the second horizontal row have a dark spot on a car's bumper. This irregularity has been termed "the dented bumper", and it occurred on every pane printed by CB. Thus, 1 in 10 of the stamps printed by CB has this dented bumper, which means there are 8.525 million in existence.

In the panes printed by CB, stamp 22 (row 5, column 2) has a black dot overtop the person walking across the street. This defect has been termed "the black sweater", and it appeared on every pane printed by CB. Thus, 1 in 50 of the stamps printed by CB has this black sweater, which means there are 1.705 million in existence. Finally, there is a rare variety of this stamp called the "Ghost Town" in which all the brown inscriptions are missing. These stamps were printed by CB.