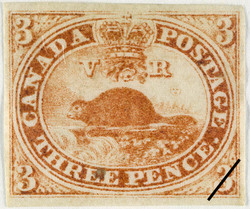 The first postage stamps issue by the Province of Canada featured the beaver on the 3-pence stamp, H.R.H. Albert, the Prince Consort on the 6-pence denomination, and Her Majesty Queen Victoria on the 12-pence stamp.

These stamps were produced on laid paper without perforations.Rawdon, Wright, Hatch and Edison, the New York security printers, received the contract to print Canadian postage stamps, producing all the requirements until May 1, 1858. On that day the company name changed, following amalgamation, to the American Bank Note Company with headquarters remaining in New York City. The new firm continued the former printing contract until the Canadian Confederation in 1867.

Sandford Fleming, a young civil engineer and draughtsman, designed the 3-pence stamp under the direction of the Honourable James Morris, Postmaster General. He also prepared the artwork with a similar beaver motif for a 1-shilling denomination which never appeared as a finished postage stamp.

Sandford Fleming's most important work concerned railway construction in Canada, and for his work Queen Victoria knighted him. He became chief engineer for the Intercolonial Railway (1857-76), and for the Canadian Pacific Railway (1871-80). In 1872 he was in charge of the Ocean-to-Ocean Expedition undertaken to find a route for the Canadian Pacific through the Yellowhead Pass. During these years he devised the system of time zones. From 1881 until his death in 1915 he served as Chancellor of Queen's University at Kingston.

The 3-pence denomination featuring a beaver building a dam was symbolic of the people in the young country of Canada building their towns, cities, and communities. The secondary purpose of choosing the beaver centred in the original meaning of the beaver skin; it represented a medium of exchange in trade.