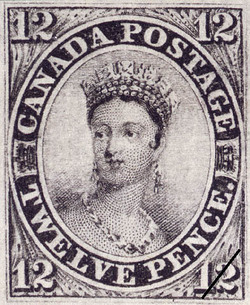 The first postage stamps issued by the Province of Canada featured the beaver on the 3-pence stamp, H.R.H. Albert, the Prince Consort on the 6-pence denomination, and Her Majesty Queen Victoria on the 12-pence.

These stamps were produced on laid paper without perforations. Rawdon, Wright, Hatch and Edison, the New York security printers, received the contract to print Canadian postage stamps, producing all the requirements until May 1, 1858. On that day the company name changed, following amalgamation, to the American Bank Note Company with headquarters remaining in New York City. The new firm continued the former printing contract until Canadian Confederation in 1867.

The portrait of Her Majesty Queen Victoria was reproduced from a contemporary engraving of a full-length painting by Alfred Edward Chalon, R.A. Although this work of art portrays the young Queen in her robes of state, only the head appears in various British colonial postage stamp designs, including the 12-pence for the Province of Canada.

On the occasion of Queen Victoria's first visit to the House of Lords, she commissioned Mr. Chalon to paint this portrait as a gift to her mother, the Duchess of Kent. The memorable event was the prorogation of Parliament on 17th July, 1837, the year of the Queen's accession to the throne.

Based on a painting by Alfred Edward Chalon. Portrait engraved by Alfred Jones.