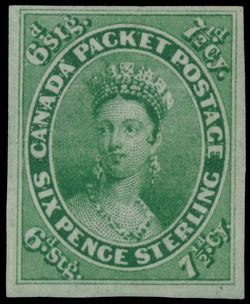 In 1854, reduced postal rates between Canada and the United Kingdom created a demand for two new denominations in postage stamps,10-pence and 7 ½-pence. The Postmaster General's Report of 31st March, 1854, announced, in part, the reduction of postal rates affecting the overseas mail to the United Kingdom. The mail of one-half ounce for each letter sent by packet ships from Halifax was charged at the reduced rate of 6-pence sterling equal to 7 ½-pence in currency. The rate was also reduced from 1-shilling and 2-pence sterling to 8-pence sterling on mail sent overseas by way of the United States.

When W.H. Griffin wrote to the security printers he sketched a suggested design of the 10-penny stamps: "It would promote the public convenience to procure postage stamps of the value of 10-pence and 7 ½ pence to correspond with the packet letter charges." While these reductions were made in sterling, the people in the Province of Canada were being drastically restricted by the confusion of money with its varying degrees of valuation. The Province of that time did not have a currency of its own. Sterling was of higher value than the monetary exchange commonly referred to as currency. For that reason, the new stamps in 10-pence has an additional inscription of 8-pence stg (sterling). The 7 ½-pence stamps were inscribed "Six Pence Sterling" in the oval frame of Queen Victoria's portrait.

The portrait of Queen Victoria was from the Chalon painting similar to the 12-pence stamps of 1851. The portrait of Her Majesty Queen Victoria was reproduced from a contemporary engraving of a full-length painting by Alfred Edward Chalon, R.A. Although this work of art portrays the young Queen in her robes of state, merely the head appears in various British colonial postage stamp designs, including the 7 ½-pence for the Province of Canada. On the occasion of Queen Victoria's first visit to the House of Lords, she commissioned Mr. Chalon to paint this portrait as a gift to her mother, the Duchess of Kent. The memorable event was the prorogation of Parliament on 17th July, 1837, the year of the Queen's accession to the throne.

Based on a painting by Alfred Edward Chalon. Portrait engraved by Alfred Jones.