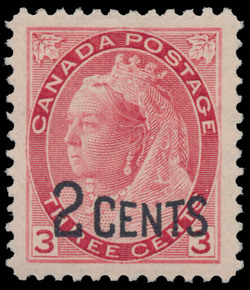 Manufactured and surcharged by the American Bank Note Company, Limited, Ottawa. The current 2-cent purple stamp was in heavy demand for domestic postage purposes. It was not of the colour (red) prescribed by the Universal Postal Union regulations for the inland letter rate. As a temporary measure, the existing 3-cent red stamps were surcharged to reduce their face value to two cents. The reduction of the domestic letter rate from three to two cents per ounce, effective 1st January, 1899, found the Post Office Department with large stocks of the 3-cent carmine stamps, originally issued on 15th January and 21st June, 1898. In order to utilize them and prevent confusion with the forthcoming 2-cent carmine issue, the Department instructed the manufacturers to overprint the 3-cent stamps with a surcharge in one line reducing the face value to two cents. The surcharge was arranged in a distinctive manner, concave at the top, so as to obliterate effectually the original words and numerals value. Wearing of the electrotypes caused variations in the apparent thickness of the surcharges.

Portrait of Queen Victoria, the same design as the ½-cent black issue of 21st June, 1898. Maple leaves at the tops and numerals at the bottom of the design. Portrait of Her Majesty Queen Victoria, from a photograph by Messrs. W. & D. Downey, London, England, and taken in 1897 for the occasion of her Diamond Jubilee.