Canadian Imperial Stamp, XMAS 1898, "We hold a vaster Empire than has been" 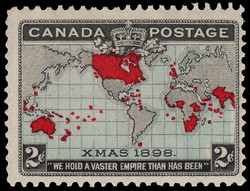 British statesmen had sought postal reforms almost from the time of Sir Rowland Hill's introduction of adhesive stamps in 1840. In 1885, Mr. James Henniker-Heaton, M.P., brought up the question of Imperial penny postage for practical consideration by introducing a motion in the British House of Commons. In 1890, the Jubilee of Penny Postage in Great Britain stimulated public interest in the proposal. In July, 1898, an Imperial Conference on postage rates was held in London. On the proposal of the Canadian representative, Hon. William Mulock, Postmaster General of Canada (later Sir William Mulock), the scheme was adopted for Great Britain, Canada, Newfoundland, Cape Colony, and Natal.

The delegates of the Imperial Conference left the opportunity open to other regions within the British Empire to take part in the Penny Postage providing Her Majesty's Government approved the action. At first a proposal suggested fixing a uniform rate for the whole of the British Empire, but no rate acceptable to all the governments concerned could be settled upon. As chief Canadian proponent of the actual adoption of Imperial Penny Postage, the Canadian Postmaster General decided to stimulate interest in the event by issuing a special postage stamp covering the new rate and emphasizing the vast extent of the British Empire. Mr. Mulock decided to use a map on the stamps. The actual drawing for this design was made in the presence of Mr. Mulock by Mr. Warren L. Green, President of the American Bank Note Company Limited in Ottawa. In October 1898, Mr. Green called at Mr. Mulock's office, and a memorandum in his handwriting still existing in the files of the Canadian Bank Note Company, reads as follows:

"This is a rough idea for the new stamp. Mr. Mulock had a number of designs for this and naturally a great many conflicting ideas. The only way I could get anything definite was to sit right down with a pencil and a brush and work right alongside of him until he got something that approached his idea."

The stamp was not meant to be a limited issue; it was intended to supplement the regular stamps for prepayment principally of overseas British correspondence, although the stamps were available for any other postal use. The map of the world in Mercator's Projection showed various parts of the British Empire in red. The stamp bore the inscription "Xmas 1898" and across the base of the design the text reads: "WE HOLD A VASTER EMPIRE THAN HAS BEEN."

On the occasion of Queen Victoria's Diamond Jubilee, Sir William Morris, a Welsh poet, wrote "A Song of Empire", published as the Jubilee Ode in June, 1897. This line occurs in the following stanza:

"We hold a vaster Empire than has been!
Nigh half the race of man is subject to our Queen!
Nigh half the wide, wide earth is ours in fee!
And where her rule comes all are free.
And therefore 'tis, O Queen, that we,
Knit fast in bonds of temperate liberty,
Rejoice to-day, and make our solemn Jubilee."