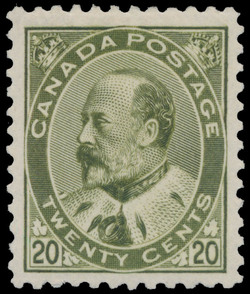 The 20-cent olive-green Queen Victoria stamp of 1900 remained in issue for four years. The exhaustion of supplies of this stamp in 1904 made it necessary to add a 20-cents denomination to the King Edward VII series. On the death of Queen Victoria on 22nd January, 1901, immediate steps were taken to replace her portrait on Canadian postage stamps. A new issue bearing the likeness of His Majesty King Edward VII was called for but did not materialize for nearly two years.

When Sir William Mulock, Postmaster General of Canada, visited London to attend the coronation of Edward VII he likely spoke to the Prince of Wales, later King George V, on the subject of the new Canadian stamps. The Prince, himself a philatelist and interested in the designs of postage stamps, suggested a simple and dignified arrangement that was adopted with very little change.