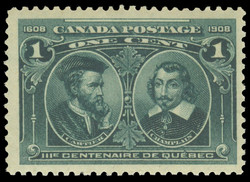 In the summer of 1908 Canadians honoured the three hundredth anniversary of the founding of Quebec in 1608 by Samuel de Champlain, the French explorer and colonizer. In March, 1908 the government proposed to issue a series of postage stamps to commemorate the occasion. In view of the marked departure from the precedent in subject matter for the proposed stamp design, the Department sought the permission of King Edward VII to use portraits of non-royal persons and historical subjects on stamps of permanent validity. His Majesty consented, and the stamp were released on [16th] July, 1908 for sale to the public throughout the Dominion [before] the Prince of Wales (later King George V) reached Québec. Portraits of Jacques Cartier and Samuel de Champlain, from paintings dated about 1839, in the Hotel de Ville at St. Malo, France. Jacques Cartier was born in 1494 at St. Malo in Brittany. On his first voyage to the New World he erected a cross at Gaspé. In May, 1535 he set out on his second voyage; on September 15, he reached Stadacona, an Indian village where Quebec now stands. His subsequent explorations penetrated the St. Lawrence River as far as the island of Montreal. He died at St. Malo in 1557. Samuel de Champlain was born about 1567 at Brouage on the west coast of France. In 1603 he joined in an expedition to the St. Lawrence and erected his "Abitation" at Stadacona, the Indian village of Cartier's time. There he founded the first white settlement. In 1609 he travelled down the Richelieu River to the lake subsequently known by his name. He died on Christmas Day, 1635, in Quebec.