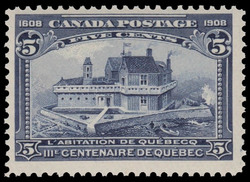 In the summer of 1908 Canadians honoured the three hundredth anniversary of the founding of Quebec in 1608 by Samuel de Champlain, the French explorer and colonizer. In March, 1908 the government proposed to issue a series of postage stamps to commemorate the occasion. In view of the marked departure from the precedent in subject matter for the proposed stamp design, the Department sought the permission of King Edward VII to use portraits of non-royal persons and historical subjects on stamps of permanent validity. His Majesty consented, and the stamp were released on [16th] July, 1908 for sale to the public throughout the Dominion [before] the Prince of Wales (later King George V) reached Québec.

"L'Abitation de Québec," adopted from a reproduction of the original sketch by Samuel de Champlain, from the Paris quarto of 1613. The site was near the marketplace of the Lower Town, Quebec. The archaic French fort is from Champlain's writing in one of his manuscripts. The stronghold, with a deep moat for protection from Indians, contained a storehouse and two houses with galleries.