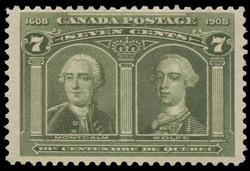 In the summer of 1908 Canadians honoured the three hundredth anniversary of the founding of Quebec in 1608 by Samuel de Champlain, the French explorer and colonizer. In March, 1908 the government proposed to issue a series of postage stamps to commemorate the occasion. In view of the marked departure from the precedent in subject matter for the proposed stamp design, the Department sought the permission of King Edward VII to use portraits of non-royal persons and historical subjects on stamps of permanent validity. His Majesty consented, and the stamp were released on [16th] July, 1908 for sale to the public throughout the Dominion [before] the Prince of Wales (later King George V) reached Québec.

Portraits of Montcalm (1712-1759) and Wolfe (1727-1759), the two military antagonists in the final struggle for the mastery of Canada. Louis Joseph, Marquis de Montcalm, the French general, was born near Nîmes in 1712. A soldier from his early youth, Montcalm received the appointment of commander of the French forces in North America in 1756. Despite his brilliant military efforts, the British forces closed in on Quebec on 13th September, 1759. Montcalm, fatally wounded, died in the evening of the following day, and was buried in Quebec City. James Wolfe, commander of the British forces arrayed against Quebec, was born in 1727 in Westerham, England. He had a strong military background, and at thirty-one was a Brigadier-General. In June, 1759, his expedition advanced on Quebec and besieged the fortress for twelve weeks. On the night of 12th September his forces climbed the heights to the Plains of Abraham. Wolfe, wounded three times, died in battle and was buried in England.