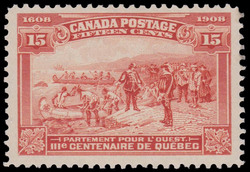 In the summer of 1908 Canadians honoured the three hundredth anniversary of the founding of Quebec in 1608 by Samuel de Champlain, the French explorer and colonizer. In March, 1908 the government proposed to issue a series of postage stamps to commemorate the occasion. In view of the marked departure from the precedent in subject matter for the proposed stamp designs, the Department sought the permission of King Edward VII to use portraits of non-royal persons and historical subjects on stamps of permanent validity. His Majesty consented, and the stamp were released on [16th] July, 1908 for sale to the public throughout the Dominion [before] the Prince of Wales (later King George V) reached Québec.

This stamp was designed by an artist of the American Bank Note Company. The scene depicted is that described by Champlain in the following words, taken from the narrative of his third voyage to America:

"With our canoes laden with provisions, our arms and some merchandise to be given as presents to the Indians, I started on Monday, May 27th, from the Isle of Sainte Helaine, accompanied by four Frenchmen and one Indian. A salute was given in my honour from small pieces of artillery." The archaic French note is introduced in the word "partement," used by Champlain in place of the modern "départ."