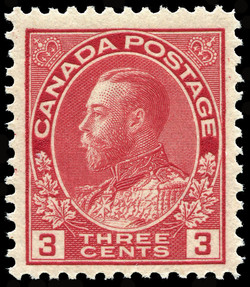 When the postmasters and the public alike complained about the similarity in colour of the 50-cent sepia stamps that had been issued on 26th January, 1912, and the 3-cent brown issue of 6th August, 1918, a change became necessary. The postmasters found that the 3-cent brown stamps were difficult to cancel effectively. As a result, carmine-colour stamps of the same denomination replaced the brown issue.