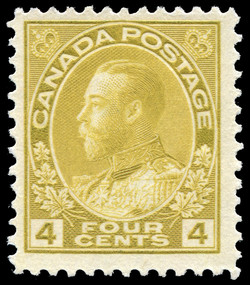 In response to a demand for stamps of the denominations of four cents and one dollar, new stamps were released. The 4-cent denomination was decided upon at a conference of officers of the Post Office Department held on the 6th April, 1922. The new stamp offered convenience in prepaying postage on letters addressed to the United Kingdom and other parts of the Empire.