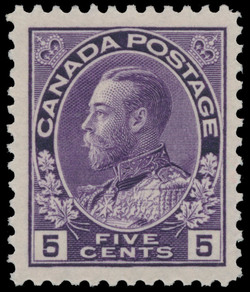 The Madrid Conference of the Universal Postal Union, held in 1920, adopted new international postage rates effective from the 1st October, 1921. The new rate necessitated certain changes in the colours of Canadian postage stamps. The 1-cent stamp was yellow instead of green; the 2-cent green instead of red, and the 10-cent blue instead of plum. The 5-cent blue stamp was changed to violet in order to avoid having two stamps of different denominations in the same colour.