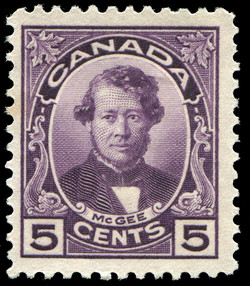 Born in Ireland in 1825, he emigrated early in life to the United States where he became a journalist. Later, he went to London as parliamentary correspondent. Although he had been intensely anti-British, he changed his opinions and advocated a staunch adherence to British rule. He came to Canada in 1857 and in 1858 entered Parliament where he supported the union of the British provinces in North America. In 1862, he became a cabinet minister, and lived to see Confederation accomplished. He was assassinated on 6th April, 1868, on his return home from a session of the House of Commons in Ottawa.

Portrait engraved by Elie Timothée Loizeaux. Based on a photograph by William James Topley.