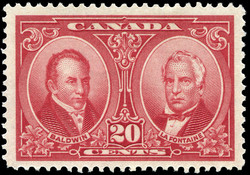 Baldwin and Lafontaine were leaders in Upper and Lower Canada, respectively, in the long struggle for representative government. They were advocates of constitutional methods of reform as opposed to armed force.

Baldwin was born in the town of York, now Toronto, in 1804. At the age of twenty-five he entered the legislature for Upper Canada. He was a lawyer by profession, and a moderate reformer. After the union of Upper and Lower Canada, he became a member of the executive council and joined Lafontaine in the promotion of national unity. He died in 1858.

Lafontaine was born in Boucherville, Quebec in 1807. He was admitted to the bar in 1829, then elected in the following year to the assembly in Lower Canada. At first he opposed the union of Upper and Lower Canada, but later favoured it. He was associated with Baldwin in the struggle for responsible government. In 1854, Queen Victoria knighted him; he died in 1864.

Portrait engraved by William F. Ford. Based on a photograph by William Notman.