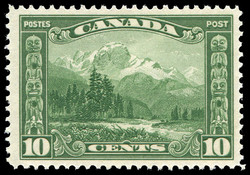 Commencing with the issue of 1928, the Post Office Department for the first time utilized its higher value stamps with regular issue for the purpose of depicting Canadian scenes of geographical and industrial interest from coast to coast. This was a significant event in the development of Canadian postage stamps as a medium of information about Canada. The first stamps released under this new policy showed a wide diversity of subjects. They ranged from the internationally famous fishing schooner Bluenose, on the Atlantic Coast, to scenic Mount Hurd in British Columbia. The scheme met with instant public approval. The Department has continued scenic stamps in each regular issue since 1928. With a few exceptions of commemorative issues prior to 1928, Canadian postage stamps portrayed the royal family.

A vignette, "The Ice-crowned Monarch of the Rockies," from an original watercolour painting by Frederick Marlett Bell-Smith, R.C.A., by kind permission of R.D. Hume, Q.C., of Toronto.

The painting shows Mount Hurd, (named after Major Hurd, the engineer and explorer), in the Ottertail Range of the Rocky Mountains in British Columbia, and in a panel at each side of the stamp is a totem pole. This design depicts the natural beauty of Canada and its interesting folklore. The totem poles are reproductions from a Canadian government photograph of one owned by the Gitksan tribe, a people of the Skeena River. The pole is located in the Upper Skeena valley at a small place called Kitwanga, an Indian name meaning Place of the Rabbit. The Indian name of the totem pole is Spesanish, meaning Half-Bear Den. The pole stands nineteen feet in height.