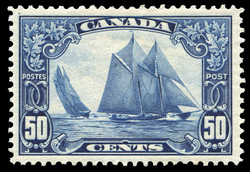 Commencing with the issue of 1928, the Post Office Department for the first time utilized its higher value stamps with regular issue for the purpose of depicting Canadian scenes of geographical and industrial interest from coast to coast. This was a significant event in the development of Canadian postage stamps as a medium of information about Canada. The first stamps released under this new policy showed wide diversity of subjects. They ranged from the internationally famous fishing schooner Bluenose, on the Atlantic Coast, to scenic Mount Hurd in British Columbia. The scheme met with instant public approval. The Department has continued scenic stamps in each regular issue since 1928. With a few exceptions of commemorative issues prior to 1928, Canadian postage stamps portrayed the royal family.

The Canadian fishing schooner, Bluenose, racing off Halifax Harbour, a composite picture made from photographs taken in 1922 by W. R. MacAskill, of Halifax, Nova Scotia.

The schooner was built in 1920-21, at Lunenburg, Nova Scotia, by Messrs. Smith and Rhuland, to the designs of W. J. Roué, of Halifax, and launched in March, 1921. Essentially a practical fishing boat, the schooner was also designed to uphold the Bluenose racing supremacy on the Atlantic seaboard. That she achieved her promoters' ambition is proved by the fact that she decisively defeated every competitor of her class. She never lost a series of races. The owners of the Bluenose were honoured in 1935 by having their schooner present when King George V reviewed the British Fleet at Spithead. In selecting this design, the Department gave world-wide publicity to three important phases of Nova Scotian life and industry: fisheries, ship-building, and seamanship.