Centre Block of the Parliament Buildings 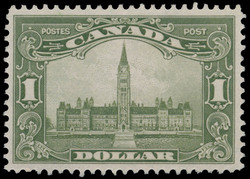 Commencing with the issue of 1928, the Post Office Department for the first time utilized its higher value stamps with regular issue for the purpose of depicting Canadian scenes of geographical and industrial interest from coast to coast. This was a significant event in the development of Canadian postage stamps as a medium of information about Canada. The first stamps released under this new policy showed wide diversity of subjects. They ranged from the internationally famous fishing schooner Bluenose, on the Atlantic Coast, to scenic Mount Hurd in British Columbia. The scheme met with instant public approval. The Department has continued scenic stamps in each regular issue since 1928. With a few exceptions of commemorative issues prior to 1928, Canadian postage stamps portrayed the royal family.

The Parliament Buildings in Ottawa

The Centre Block of the Federal Parliament Buildings located on Parliament Hill, overlooks the Ottawa River. John L. Pearson designed the buildings, which were constructed in 1917-1922. These replaced the original structure destroyed by fire on 3rd February, 1916. The building including the Senate and House of Commons also contains numerous committee rooms and parliamentary offices. the lofty Peace Tower dominating the Centre Block contains the impressive Memorial chamber that honours the war dead of Canada.