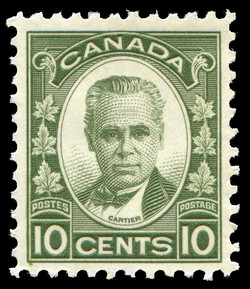 The Post Office Department prepared the Cartier design to replace the pictorial stamp, Library of Parliament, of the 1930 issue. Portrait of Sir George Etienne Cartier. Cartier was born in 1814 in the County of Vercheres, in Quebec. Of strong radical tendencies at first, he later became a leading member of the Liberal Conservative Party and wielded tremendous political influence in his native province. He entered Parliament in 1848, and became attorney-general for Lower Canada in 1856. He was Macdonald's chief aide in promoting Confederation and was a delegate to the Quebec Conference of 1864. He was created a baronet by Queen Victoria in recognition of the part he had played in bringing about the federal union. A notable career of public service was terminated by his sudden death in 1873.

Based on a photograph by William Notman.