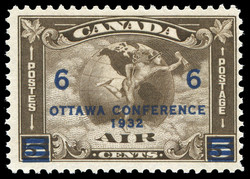 At the time of the Imperial Economic Conference of 1932, the Post Office Department, in co-operation with the military, naval, and civil aviation authorities, conducted a series of experimental airmail flights between Bradore Bay, on the Strait of Belle Isle, and Ottawa, via Montreal. The purpose of the flights was to demonstrate the time-saving qualities of airmail service with fast trans-Atlantic steamers using the St. Lawrence route to Europe. To mark the inaugural flight and further commemorate the Ottawa Conference, the Post Office Department arranged to surcharge to 6-cents a quantity of the 5-cent, brown, airmail stamps of the 1930 issue. This surcharge did not obscure the postage stamp design. The four blue horizontal bars obliterated the original figures of value.

An allegory, "Airmail Encircles the Globe," from a drawing by a staff artist of the British American Bank Note Company, Limited. The figure of Mercury, mythical winged messenger of the gods, symbolizing airmail, is shown, with a scroll in his hand, against a globe outlining the western hemisphere. The design symbolizes the speed in postal communication by air post.