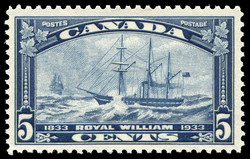 The achievements of the Canadian steamship Royal William were commemorated by the issuance of a special 5-cent postage stamp in 1933. This ship was designed by James Goudie and built at Quebec by John S. Campbell and George Black. The first seagoing steamship built in Canada, the Royal William was steam-propelled, with sails as a secondary means of propulsion. It was launched on 29th April, 1831. When she visited Boston on 17th June, 1832, the Royal William was the first seagoing steamer to fly the British flag in a United States port. In addition, it was the first steamship built for fostering intercolonial trade between ports in British North America. It crossed the Atlantic in 1833. Eventually Spanish interests purchased the ship but it came to an inglorious end at Bordeaux, France, in 1840, when her engines were removed. In issuing this postage stamp, the Post Office Department commemorated the important influence on Canada's development exercised by the shipbuilding industry of the Maritime Provinces.

The steamship Royal William, with her sails furled, passes a sailing ship in stormy weather. This picture was adapted from a drawing in the National Archives of Canada. S. Skillet painted the original in oils in 1834 and the picture is now in the possession of the Literary and Historical Society of Quebec.