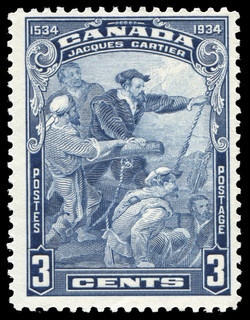 On the 1st July, 1934, a special 3-cent stamp commemorated the four- hundredth anniversary of the discovery of Canada by the famous French navigator, Jacques Cartier. Jacques Cartier's first voyage penetrated the Gulf of St. Lawrence as far as Gaspé. His discoveries during that voyage and his subsequent exploration opened the great St. Lawrence seaway to navigation and led the way to the settlement of the rich lands along the river. This intrepid explorer, who made his first discoveries with two ships of smaller combined tonnage than a modern Grand Banks fishing schooner, set sail from St. Malo in France on 20th April, 1534, and landed at Gaspé on 24th July, 1534. Here he erected a large cross in the name of the King of France, thus establishing the claim of his sovereign to the territory. The discovery of New France by Jacques Cartier.

The engraving shows the explorer directing the first landing operation on the shores of what is now Canada. An artist engraved the central portion of the design from a drawing in the Montreal offices of the British American Bank Note Company. Although the drawing is signed, the signature cannot be deciphered. It may be the work of a former staff artist of about 1880.