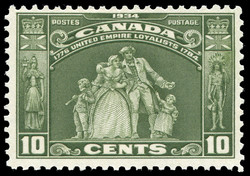 In 1934 Canada commemorated the 150th anniversary of the completion of the United Empire Loyalists' immigration to Canada by issuing a special 10-cent postage stamp. Dominion Day, 1st July, 1934, was a suitable day for its release. At the close of the American War of Independence, many persons residing in the newly created United States of America remained loyal to the British Crown. They accordingly emigrated to Canada, commencing about the time of the evacuation of Boston by General Howe in March, 1776. The full tide of Loyalist immigration to Canada, however, did not take place until the evacuation of New York by the British in 1783. In the spring and summer of 1784 the great majority of the Loyalists within the limits of what is now the Province of Quebec moved to Upper Canada, now the Province of Ontario. Many settled along the Bay of Quinte and as far as Niagara. The influx into what is now New Brunswick resulted in the settlement of that province, and its separation from Nova Scotia.

Against a background of cross-hatchings, the central vignette shows a sculpture of a family group of father, mother, and two children dressed in the costumes of the Revolutionary period. The March Brothers of Teddington, England, created this work of art known as the United Empire Loyalists' Monument. Flanked by the trees of Prince's Square, it stands in front of the Court House in Hamilton, Ontario. On either side of the centre design are depicted the figures of Britannia and a Mohawk Indian, both surmounted by a crown and the Union Jack. Britannia is intended to personify the British Empire and to illustrate further the allegiance to the Empire of the Loyalists of British ancestry; the Mohawk Indian commemorates the part played in the Loyalist migrations by those Indians who elected to remain loyal to the British.