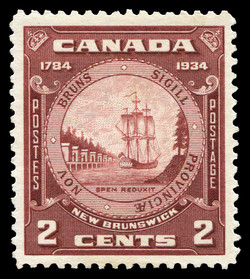 The 150th anniversary of the founding of the Province of New Brunswick by King George III in 1784, was commemorated in 1934 by the issuance of a special 2-cent stamp. New Brunswick separated from Nova Scotia in 1784. The issue went on sale on the 16th August, 1934, to coincide with celebrations which took place in New Brunswick in commemoration of the sesquincentennial anniversary.

When the stamps were required, no impression of the original seal could be found. As the only copy available in Ottawa was derived from the seal granted by Queen Victoria. It was used in designing the same as the original Great Seal of King George III.

Great Seal of the Province of New Brunswick. The original seal is believed to be no longer in existence. With letters patent dated 21st February, 1785, it was forwarded to Thomas Carleton, Governor of the colony, from the Court of St. James. The basic design on the obverse was the same on all great seals granted the colony by succeeding monarchs on their accession to the throne. A description follows: "A representation of a ship sailing up a river, on the borders of which is a new settlement with lofty pines on each side, destined to Naval purposes...." The Latin inscription, SIGILL PROVINCIA NOV" BRUNS, means, "Seal of the Province of New Brunswick." The motto, SPEM REDUXIT, "It brings back hope," relates to the circumstances involved in the establishment of the colony.