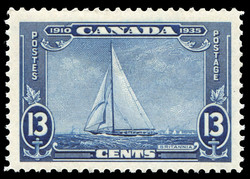 On the 1st April, 1935, the contract for the manufacture of Canadian postage stamps and postal stationery reverted to the Canadian Bank Note Company, Limited, Ottawa. On 6th May, 1935, King George V celebrated the twenty-fifth anniversary of his accession to the throne in 1910. To commemorate this Silver Jubilee, Canada joined with the other countries of the Commonwealth to honour the sovereign, himself a keen philatelist, by the issue of six special postage stamps.

View of the Royal Yacht Britannia, from a painting by A. J. W. Burgess. King George V gave his permission to use this design. The Canada Post Office Department selected this subject because the Britannia was so closely associated with His Majesty King George V. Originally built in 1893 for King Edward VII, then Prince of Wales, the Britannia became a sensation in the yachting world. In all, through nearly half a century of racing life, Britannia won 231 first prizes and 129 others out of a total of 625 starts. A steam vessel appears in the left background, sailing in the same direction as the Britannia. It is probably the Royal Yacht, Victoria and Albert.