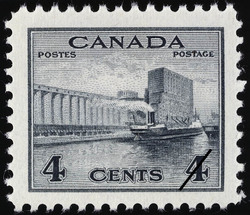 During the early days of the Second World War Canadian Postal authorities believed that the stamps in use since 1938 should be replaced with a new issue featuring Canada's substantial contribution to war work. A new general issue to last for the duration of the hostilities was designed. Subjects depicting Canada's munitions, war supplies, shipbuilding, agriculture, her importance as a great air-training centre, and as a source of food were chosen for the pictorial stamps. For many years, in the regular issues of Canadian postage stamps, the Department adhered to the custom of displaying the King's portrait on the lower denominations. Prior to the Second World War all denominations below 10-cents had been reserved in this way. In the wartime issue of 1942 an exception was made in the designs of the 4- cent and 8-cent denominations. They illustrated a grain elevator and a farm scene, indicating the contribution of Canada through her agricultural industry to the war effort of the Allies.

Ships on the Great Lakes loading Canadian wheat. The grain elevators and ships shown on this stamp cannot be specifically identified, but are intended to represent Great Lakes types, and the agricultural contribution of the West. When the normal food sources of Britain were lost by German continental occupation, Canada became her immediate source of supply for agricultural products.