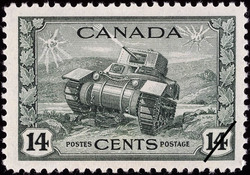 During the early days of the Second World War Canadian Postal authorities believed that the stamps in use since 1938 should be replaced with a new issue featuring Canada's substantial contribution to war work. A new general issue to last for the duration of the hostilities was designed. Subjects depicting Canada's munitions, war supplies, shipbuilding, agriculture, her importance as a great air-training centre, and as a source of food were chosen for the pictorial stamps. In 1943 the Post Office Department issues new denominations of postage stamps to meet the amended rate of postage, effective 1st April, 1943. No new designs were introduced.

"Ram" tanks of the Canadian Army, named after the Rocky Mountain ram, were produced in Canada by the railway equipment and locomotive manufacturers. The Ram tank, weighing 32 tons heavily armed, was probably the first piece of armament of a specifically United States type produced in Canada. It was patterned after the commonly known General Lee tank developed in 1939 in the United States. After actual combat in Libya, the design was materially modified; it had a maximum speed of 25 miles per hour.