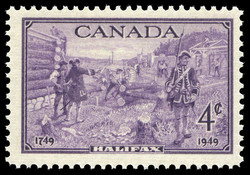 In 1748 at the close of "King George's War" Louisburg was restored to France, but the British saw the necessity of strengthening their hold in Acadia. In 1749 British authorities, after deciding that the uninhabited Chebucto Bay was an ideal site for a naval station, ordered the Honourable Edward Cornwallis to settle and fortify it. The two hundredth anniversary of the founding of what is now the city of Halifax was commemorated in 1949 by the issuance of this postage stamp.

A scene based on a painting by C. W. Jefferys, R.C.A., entitled "Founding at Halifax, 1749." The picture illustrates men assembling original structures on the present site of the city. The construction force and military personnel represent the original group brought from England by the Honourable Edward Cornwallis, who landed at the location on the 21st June, 1749.