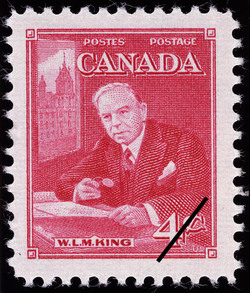 The date on this stamp is hidden in the bottom right-hand corner. These two stamps originated a series planned to honour the Canadian prime ministers who had not been previously portrayed. This series of two stamps, with additional issues that followed, commemorated the men of who guided the destinies of Canada from the time of Confederation.

A portrait of the Right Honourable William Lyon Mackenzie King, who served as Prime Minister of Canada during three terms of office: from December 1921 to June 1926; from September 1926, to August 1930, and from October 1935 to November 1948. Mr. King was born in Kitchener, Ontario, December, 1874, and died at his summer home at Kingsmere, near Ottawa, on 22nd July, 1950. The stamp design originated from a photograph supplied through the courtesy of Karsh of Ottawa.

Based on a photograph by Yousuf Karsh. Designed by Herman Herbert Schwartz.