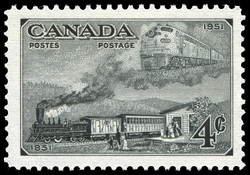 The date of this stamp is plainly visible in the top-right corner, but there is a hidden date reference on the train as well. This centennial commemorative issue of four postage stamps honoured the transfer in 1851 of the administration of postal service from Great Britain to British North America. The three low denominations emphasize the development of communications by land, water, and air, a feature of Canadian history closely related to the development of postal service. The fourth stamp in the series features the first postage stamp issued in 1851 by the Province of Canada. The first day of issue coincided with the stamp exhibition called CAPEX (Canadian Association for Philatelic Exhibitions). The Postmaster General, the Hon. G. Edouard Rinfret, K.C., M.P., was the Honorary President.

The 4-cent stamp displays trains of the periods 1851 and 1951. The lower portion features an old-fashioned wood-burning steam-engine and train. The modern train in the upper half of this stamp is a composite picture of two Canadian trains. One is the first streamlined diesel electric locomotive manufactured in Canada at the Montreal Locomotive Works in April, 1950, for the Canadian National Railways. The other is a train in regular passenger service in 1951 on the Canadian Pacific Railway between Montreal and Vermont.