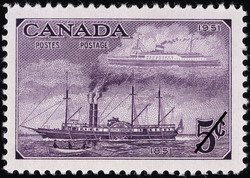 This centennial commemorative issue of four postage stamps honoured the transfer in 1851 of the administration of postal service from Great Britain to British North America. The three low denominations emphasize the development of communications by land, water, and air, a feature of Canadian history closely related to the development of postal service. The fourth stamp in the series features the first postage stamp issued in 1851 by the Province of Canada. The first day of issue coincided with the stamp exhibition called CAPEX (Canadian Association for Philatelic Exhibitions). The Postmaster General, the Hon. G. Edouard Rinfret, K.C., M.P., was the Honorary President.

The 5-cent postage stamp displays the City of Toronto, a side-paddle wheel steamship, reproduced through the courtesy of Canada Steamship Lines, Limited. The original drawing was by G. A. Cuthbertson. This steamship, built at Niagara-on-the-Lake, Upper Canada, for the Royal Mail Line sailed from Lake Ontario ports to Prescott on the St. Lawrence River. In the upper half of this stamp a reproduction appears of the Canadian National Steamship, Prince George, built in Victoria, B.C. It was operated at the time of issue from Vancouver, B.C., to Alaska.