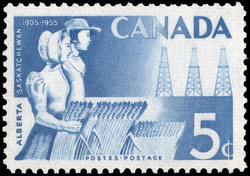 The fiftieth anniversary of the establishment of Alberta and Saskatchewan as provinces in the Canadian Confederation was marked by the Canadian Post Office by a commemorative issue on 30th June, 1955. The two provinces, once part of the Northwest Territories, had been opened for immigration as the result of the linking of the older provinces of Canada with the Pacific coast by railroad. Immigrants poured in to take up free homesteads after the territory in 1882 had been divided into four districts, Alberta, Saskatchewan, Assiniboia, and Athabasca. Finally on 1st September, 1905, acts of Parliament united parts of the Northwest Territories into the respective provinces of Alberta and Saskatchewan. The Post Office took the occasion to pay tribute to the scores of thousands of pioneers who had opened up the provinces. The 5-cent stamps commemorated their achievements.

A man and a woman in costumes of the early pioneers stand before sheaves of wheat with oil wells in the background.