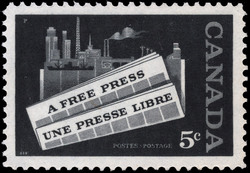 The date for this stamp can be found in the bottom-left corner. This stamp contains the designer's initial in the top-left corner. The initial P belongs to Alan L. Pollock, but the P is not a solid colour, like initials normally are. It has a striped pattern to contrast the dark background. The issue of a postage stamp featuring the Press of Canada emphasized the significant influence of the printed word on the life of Canadians. Owing to its popularity, the newspaper appears as the featured portion of the stamp design; the issue coincided with the recent jubilee year of co- operative newsgathering in Canada. In 1957 the Canadian Press celebrated forty years of service as a non-profit national news association serving Canadian newspaper from coast to coast.

Co-operative Canadian newsgathering began in 1907 when the Western Associated Press came into being. Next year the Maritime publishers formed the Eastern Press Association. In 1911 the Canadian Press Limited became a holding company for the Canadian rights of the Associated Press. After the publishers had overcome many obstacles, the four news service agencies which had operated in the West, the Maritimes, Ontario, and Quebec united into one. A government grant of $50,000 yearly for seven years helped to pay for leased wires over the vast gaps that separated the news organizations, and the Canadian Press became a national entity.

An overall symbolic design. The foreground features the respective mastheads of an English and French newspaper with the words, "A FREE PRESS-UNE PRESSE LIBRE". The background suggests a city skyline with skyscrapers, a television tower, and communication poles. A factory and a ship help to complete the design.