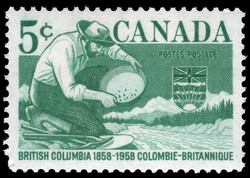 In 1858 when pioneers discovered gold in the valley of the Fraser River thousands of miners flocked into the country to search for wealth. One hundred years later the people of the entire province of British Columbia celebrated the Centennial while the Post Office Department commemorated the anniversary by the issue of a 5-cent postage stamp.

The gold rush of 1858 opened up a large part of British Columbia, and helped in the development of the colony and the final establishment of the province.

An illustration of a placer miner panning gold on the bank of a mountain stream.  (In mining the word "placer," probably of American-Spanish origin about 1848, means a place where surface deposits are washed for valuable minerals such as gold.)