The first elected assembly of Nova Scotia, 1758, marked the beginning of our democratic government 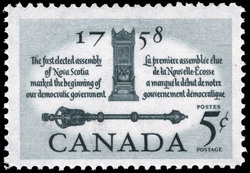 The Speaker's chair and mace suggest 2nd October, 1758, when the first General Assembly, in what is now Canada, met in the Court House in Halifax. In the same year England had granted self-government to the colony. The newly formed government consisted of a Governor, Council, and General Assembly. The Governor and council resolved to provide for the election of sixteen members for the province as a whole including New Brunswick which was still part of Nova Scotia. Maces evolved from weapons of war to ceremonial items of prominence in the British parliament.

The mace should not be confused with the sceptre appearing on some of the British Commonwealth postage stamps. A Speaker's chair forms the central motif of the stamp with a ceremonial mace below it. Flanking the chair, text in English and French tells of the first elected assembly marking the beginning of democratic government in Canada.