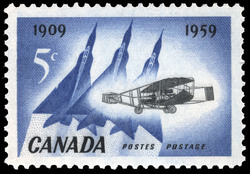 Canadians everywhere celebrated 1959 as the golden jubilee year of the country's first aeroplane flight near Baddeck, Nova Scotia, when J.A.D. McCurdy piloted the Silver Dart half a mile over Bras d'Or Lake. This historic flight was the culmination of several years' activity of the Aerial Experiment Association formed at Baddeck by Dr. Alexander Graham Bell.

After experimenting with kites for more than ten years he decided to form a group to achieve in Canada the dream of the ancients of actually flying through space. He selected his associates carefully: two young, enthusiastic, engineering graduates of Toronto University, his secretary's son, John McCurdy, and a friend, F.W. Baldwin. Glen Curtiss, an authority on gasoline engines and Thomas Selfridge of the United States Army also were invited to pool their talents with the elderly inventor. The Association continued experiments at Baddeck for a while, then operations were moved to the Curtiss' machine shop in Hammondsport, N.Y., where they built four powered aircraft. All members contributed ideas and work to the four planes, but each was credited with the main design of a machine. Thus, the second place, the White Wing was credited to Baldwin and the Silver Dart to McCurdy, who was the only one to fly it.

The stamp depicts three Delta-wing aircraft in silhouette with the Silver Dart in a darker shade in the foreground.