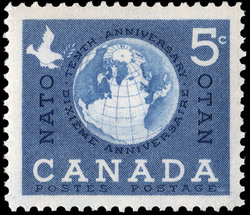 NATO, short for the North Atlantic Treaty Organization, was formed for the defence of the Atlantic community of nations. The North Atlantic Treaty (also the Atlantic Pact) was signed on 4th April, 1949, at Washington by twelve nations: Canada, Great Britain, the United States, Belgium, Luxembourg, the Netherlands, France, Italy, Norway, Iceland, Denmark, and Portugal. By this treaty, an attack on any one of the states was formally declared to be an attack upon all of them. When the stamps were issued in 1959, fourteen member nations formed the alliance.

OTAN, appearing on the right side of the stamps is French for NATO; ORGANISATION DU TRAITE L'ATLANTIQUE DU NORD. The design of the new postage stamp contains, in the upper left-hand corner, the dove of peace with an olive branch in its beak. In the left-hand margin appear the initials NATO and the French OTAN in the right margin. The centre of the stamp depicts the globe of the world showing the area in which the NATO members are located.