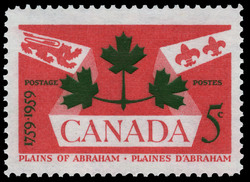 A New commemorative stamp to mark 200 years of united effort by Canada's two language groups in building a modern nation will go on sale on September 10th. It marks the anniversary of the battle of the Plains of Abraham which took place on September 13th, 1759, outside the walls of the City of Quebec. The settlement reached after the battle resulted in the creation of a bilingual nation whereby both English and French languages and traditions are honoured and protected. The new stamp is to be printed in red and green. The maple leaves, the 5¢ denomination, the dates and the words "Postage" and "Postes" appear in green. The British and French heraldic emblems on either end of the ribbon which has "Canada" in the centre symbolize the union of these peoples to form Canada. The three maple leaves, which are similar to those on provincial Coats of Arms, represent the two original groups as well as the people of other origins who have joined in the task of building our country. This is the second occasion on which the Canada Post Office has paid tribute to the achievements of General James Wolfe and the Marquis de Montcalm. In 1908 a seven cent olive green stamp bearing the likenesses of the two gallant generals was issued as part of the Quebec Tercentenary Series. The new stamp is the work of Mr. Philip Weiss of Ottawa. He is attached to the Department of Trade and Commerce where he assists in the preparation of Canadian Government exhibits. He also teaches art at local schools. This is the second stamp of his design to be issued, the first being the N.A.T.O. commemorative which went on sale earlier this year. A native of Montreal Mr. Weiss has lived in Toronto where he attended the Ontario College of Art.