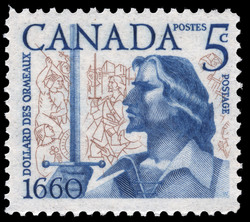 The designer's initial can be found in the bottom-right corner of the stamp. The initial W belongs to Ephrum Philip Weiss. A special postage stamp will be issued to commemorate the three-hundredth anniversary of the Long Sault battle in which Dollard des Ormeaux and his companions saved the struggling young colonies at Montreal and Quebec from destruction by the hostile Iroquois. Adam Dollard was born in France in 1635. He came to Canada and, in 1657, was attached to the garrison at Montreal. He later received a tract of uncleared land and acquired the title of Sieur des Ormeaux. In the spring of 1660, he set out with sixteen white men and a number of Huron and Algonquin Indians on an expedition up the Ottawa River. At the foot of the Long Sault, not far from the present town of Carillon, Quebec, the group was attacked by several hundred of Iroquois. The only refuge was an abandoned palisade which was hastily barricaded. The Iroquois attack was met with unyielding force and determination. The struggle lasted an entire week. Finally outnumbered and fast running out of supplies, Dollard ordered a last desperate attempt to smash the attacking force. According to the most widely accepted version, a keg of gunpowder was to be thrown over the barricade to do the greatest possible damage to the attackers when they made their final charge. The keg was thrown out but an overhanging branch caused it to fall back, wounding and killing many of the defenders and giving the besiegers their opportunity. Swarming over the palisade, they overwhelmed the survivors in a savage hand to hand melée. In assessing the value of the battle at Long Sault, historians point out that it saved Montreal and Quebec from surprise attacks and it permitted time for the strengthening of the colonies' defences. In addition, the determination displayed by Dollard and his group discouraged planned attacks on the settlements and showed that the French would fight to the end to defend their now homes on the North American continent. In announcing the new stamp, the Postmaster General said he hoped that this commemorative stamp would serve as a reminder to the Canadian people of their heritage and that it would foster the spirit of courage and adventure needed to meet the challenges of our day.