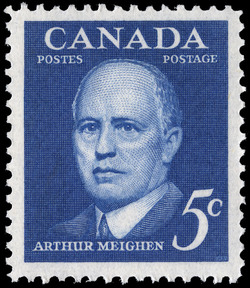 Arthur Meighen destined to become Prime Minister of Canada, was born in 1874 on a farm in Perth County, Ontario. He attended St. Mary's Collegiate and after graduation from Toronto University taught High School for a short time. He turned to the study of law in Winnipeg, Manitoba, in 1898, and was called to the bar in 1903. He practiced law in Portage la Prairie until 1915. First elected to the House of Commons in 1908, he was soon recognized as an outstanding debater with a keen, incisive mind. Appointed Solicitor General in 1913, he became a member of Cabinet in 1917 as Secretary of State and shortly after, Minister of Interior in the Union Government. Arthur Meighen played an important role during these difficult years when his country was engaged for the first time in a global war. His energy and ability brought him to the fore in his party and when Sir Robert Borden retired he succeeded as Prime Minister on the 10th July, 1920. The Union Government was defeated at the polls in December 1921 and Arthur Meighen became Leader of the Opposition where his debating skill, great energy and analytical mind dominated a House of Commons confronted with great national problems. Returned to power as Prime Minister on the 29th June, 1926, following the most involved and controversial disputes over constitutional procedures in the country's history, his government was defeated by one vote. In the general election his party was defeated in September 1926. At this time Mr. Meighen withdrew from political life to pursue a business career in the financial field at which he was eminently successful. He was appointed to a seat in The Senate in 1932 and accepted the government leadership there. He resigned from the Senate to enter political life again for a short time only. His business activities engaged his abilities during the remaining years of his life until his death on the 5th August, 1960. In a tribute in the House of Commons, Prime Minister John Diefenbaker said ".... the Commonwealth (has lost) one of its founding fathers and the world of letters one of its master craftmen". During his lifetime he wrote and published two books, "Overseas Addresses" and "Unrevised and Unrepresented: Debating Speeches and Others"..... The design for this stamp in the Prime Minister Series was prepared by the Canadian Bank Note Company, Limited, and the engraving was based on the best likenesses.