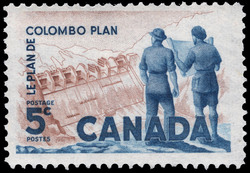 This stamp has a hidden date between the 5¢ denomination and the word "Canada". Canada's contribution to the Colombo Plan for co-operative economic development and technical assistance among countries in South and South-East Asia is demonstrated by the subject of this postage stamp to be issued to mark the tenth anniversary of the plan. The countries of South and South-East Asia participating in this vast international development project, conceived at a meeting of Commonwealth Foreign Ministers, are, Burma, Cambodia, Ceylon, Federation of Malaya, India, Indonesia, Laos, Nepal, North Borneo, Pakistan, Philippines, Sarawak, Singapore, Thailand, and Viet-Nam. Canada, in recognition of its obligations to the broad community of mankind, has contributed technical skills as well as funds to the extent of 275 million dollars since the plan has been in operation. Through the plan, Canada has helped less fortunate countries by providing trained manpower and resources, and in reciprocation, it has gained an extensive experience in working with other nations, both in furtherance of peace among nations and acceleration of economic development. A major area of the Canadian contribution has been in the development of hydro-electric power, transportation and communication facilities. Under the technical cooperation scheme, up to 1960 Canada had assigned 156 experts in a wide variety of skills and specialized knowledge to member countries. During the same period, over 1300 trainees from these member countries spent periods in Canada studying at universities and receiving training in various government departments. Fields of study vary from agriculture and forestry to the advanced sciences involved in atomic reactors. The future promises greater undertakings which will benefit to a high degree the citizens of these countries. Looking back on the short history of the Colombo plan, we can see the farmer of Pakistan who used to plough not unlike those of 2,000 years ago. He now sees tractors in his fields more frequently and modern aircraft dusting his crops with insecticides and fertilizers. Other examples are the dusty roads of Ceylon now being replaced with modern railroads, equipped with the latest in diesel equipment, leading the vast resources uncovered by aerial and ground surveys. Pakistan and India can look forward to the benefits derived from the use of the hydro-electric programmes such as Warsak, Kundah, Mayurakshi and Umtru River. Outstanding among the achievements in India is the building of an atomic reactor near Bombay. Canada is proud and happy to be associated with the operations of the Colombo Plan since its inauguration. It is with this spirit of cooperation that particular significance is attached to this stamp which commemorates an organization which embodies the concept of the interdependence of nations and which has done so much to promote the acceptance of this concept throughout the world.