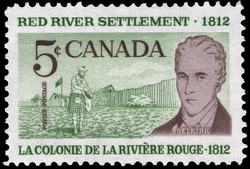 The History of the development of Canada's Western Provinces in marked by many significant events, each one playing a vital part in the development of the West. Probably the most outstanding of these events, was the establishment of the Red River Settlement near the present site of Winnipeg in 1812. This project had been in the plans of Thomas George, the Fifth Earl of Selkirk from his early youth when he first realized the importance of the high plains in the economic growth of the new nation. At the beginning of the 19th Century, an economic revolution was in progress in the Scottish Highlands and was causing widespread distress. To relieve this situation, Lord Selkirk proposed immigration of evicted crofters to British North America and the establishment of a colony in the Red River area. The first party of settlers, under the guidance of Miles Macdonald, set out by way of Hudson's Bay in 1811, staying for the winter at the mouth of the Nelson River. In 1812, the part reached the Red River and settled near the mouth of the Assiniboine River. They were soon joined by another party which set out in 1812. Other parties reached the settlement in 1814 and 1815. From the first, the colony has aroused the suspicion of the North West Company which feared that it would prove a threat to the supply of pemmican for the company's lines of communications and its posts in the far west fur bearing regions. This threat seemed to be realized when, in 1814, Macdonald prohibited the export of pemmican from the Assiniboine region. Though this difficulty was adjusted, the company decided to destroy the colony by instigating desertion among the settlers and offering free transportation to Canada. The remainder of the settlers were finally driven from the area in the Seven Oaks Massacre of 1816, which claimed the lives of Governor Robert Semple and 19 of his officers. In 1817, Lord Selkirk led a force of veterans recruited from former regiments from Montreal and re-established the Red River Colony. The colony continued to progress without further trouble from the North West Company and virtually all danger from this source was eliminated with the merger of the two companies in 1821. The new settlers had other difficulties to overcome to make the land propituous to agriculture: poor seeds, inadequate tools, a strange climate, grasshoppers and other pests and the lack of a market for grain and cattle. They did, however, manage to extract from this land the first "bumper" crop of wheat. The yield was some 1500 bushels. This was the beginning of economic stability and growth for the area now know as the Prairie Provinces. The new stamp is designed to recognize the tremendous task accomplished by Canada's western pioneers and it honours the descendents of these pioneers who have made the Canadian West a modern productive segment of the nation's burgeoning economy. The stamp is intended to bring into the foreground the importance of the founding of the Red River Settlement and draw attention to the vast changes and advances made in Canada's Prairie Provinces, changes and advances which have caused this region to become known as the Granary of the World.