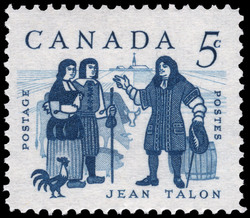 This stamp has a hidden date near the hem of the woman's skirt. The designer's initial is near the base of the barrel. The W is the initial for Ephrum Philip Weiss. Many men contributed to the early development and advancement of Canada. Soldiers, explorers and missionaries, each played a vital role and each played a part in building the nation that is Canada today. Less spectacular, but nonetheless just as important, were the achievement of the administrators and, among these men, the greatest was probably Jean Talon. Talon was born in 1625 at Châlons sur Marne, France. He joined the civil service and in 1655 became intendant of the province of Hainaut. He managed his new duties with such energy and vigour that Louis XIV, on the recommendation of Colbert, then Minister of Finance, named Talon to the intendancy of New France. His appointment was effective March 23, 1665, and on May 24 of the same year, he embarked for New France on the Saint-Sébastien, with the Governor of Courcelles and eight companies of the Regiment of Carignan. In three years, Talon did more for the development of the new country that had been done since the arrival of the first colonists. He conducted the first census in Canada and when figures indicated a need for a larger population, he asked for more people to be sent from France. This resulted in the immigration of some 1,000 women who were to become the wives of the men already in the colony. These girls were carefully selected and suitable marriages were made. To help these new families, Talon presented them with animals and new plants. These gifts by the Intendant form the subject of the new stamp. An excerp from the writings of a young officer of Talon's time reads: "the governor-general bestowed upon the married couple a bull, a cow, a hog, a sow, a cock, a hen, two barrell of salt meat and eleven crowns" and each is represented in the design of the stamp. Talon accomplished a great deal in establishing a sound economy. In order to increase the resources of the country, he imported horses and sheep from France and divided these among farmers. He encouraged animal husbandry and established small industries and a ship building yard on the St-Charles River. He literally re-created the colony on a sound economic basis before returning to France in 1668. It was during Talon's tenure that the new country went through an extraordinary expansion. In the north, Father Albanel claimed James Bay; in the west, Saint-Lusson gathered at Sault-Ste-Marie the representatives of fourteen Indian nations bringing them under the jurisdiction of France. Then Joliet and Father Marquette discovered the Mississippi in the south, followed shortly by the famous discoveries by La Salle. During his administration, Talon transformed the struggling colony, perched precariously on the rock of Quebec, into an economically sound community. He sowed the seeds of permanence, of development, of identificaton with the land, that were to guide New France and eventually all of Canada to nationhood.