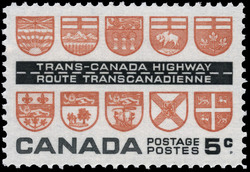 The designer's initial is in the bottom-right corner of the stamp. The P is the initial for Alan L. Pollock For years, a first-class, modern highway linking the provinces of Canada was the dream of many Canadians. But areas of sparse population and extremely rough terrain combined with complex financial problems to prevent the completion of the Highway. The Second World War emphasized the necessity of a dependable highway link between east and west and it was obvious that Federal aid would be required to coordinate the route among the provinces, and to help meet the cost in those sections where difficult construction was involved and no previous paved highway existed. It was in December, 1948, that the first Federal-Provincial Conference on the Trans-Canada Highway Act was held and on December 10th, 1949, the Trans-Canada Highway Act became reality. Under the Act, provinces were paid fifty percent of the cost of construction plus forty percent of the cost of ten percent of the mileage in each province. The present Act expires in 1963. By the time construction is completed, the cost is expected to be in the vicinity of $1,000,000,000. Under the terms of the Act, each province, subject to Federal approval, chose the shortest practical route between its borders and constructed a hard-surfaced, two-lane highway, with pavement widths of 22 and 24 feet with low gradients and gentle curves; elimination of railway grade crossings wherever it was possible; ample shoulder widths; and a load bearing capacity of nine tons for one axle. The official opening ceremonies are planned for September 4th, 1962, at Rogers Pass in Glacier National Park. In conjunction with the opening, the Post Office Department will issue a special stamp to mark the occasion. The stamp will be a tribute to one of the outstanding engineering feats of Canada's history. The Trans-Canada Highway, a dream of highway planners of many years, will provide high-standard highway conditions through some of the most difficult roadbuilding terrain in the world. This in turn has already influenced the building of many additional feeder highways which will continue to contribute to the economic growth of the nation.