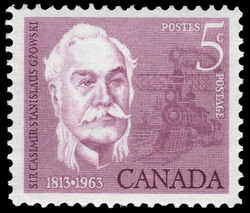 This stamp has the initial of the designer. The initial W belongs to designer Ephrum Philip Weiss. Although one of the most important figures of his time, Sir Casimir today is relatively unknown. This man who was a friend of the Fathers of Confederation not only took an active part in the military life of Canada but also in its engineering and educational life. In 1853 in partnership with Sir Alexander Tilloch Galt Luther Holton and Sir James Macpherson he founded the contracting firm which built the Great Trunk Railway between Toronto, and Sarnia. He was also responsible for the engineering of the international bridge across the Niagara, the widening of the Welland Canal, and many other engineering achievements carried out in Canada between 1850 and 1890. Sir Casimir was born in St. Petersburgh (now Leningrad) Russia on March 5th, 1813, the son of a Polish nobleman of the district of Minsk. As a youth he took part in the Polish Insurrection, was captured, and jailed for two years. Upon his release in 1834 he was given the choice of returning to Poland or going to the United States. Seeing death in the former choice he came to the new world. He remained in the United States only a short time, coming to Canada in 1842 under the sponsorship of Sir Charles Bagot. Besides his engineering feats in Canada he also helped found Wycliffe College, and was first Chairman of the Niagara Falls Park Commission, laying out the parkway as we know it today. He was first President of the Ontario Jockey Club and for 20 years was a Senator of the University of Toronto. He was also one of the founders and first presidents of the Canadian Society of Civil Engineers, which later became the Engineering Institute of Canada. In 1890, for his service in engineering and education, Sir Casimir was made a Knight Commander of the Order of St. Michael and St. George. Besides being an Aide-de-Camp to Queen Victoria he was an officer of the Canadian Engineers. Sir Casimir left his mark upon the Canadian countryside with accomplishments. His influence continues through the Gzowski Cup for competition within the Dominion of Canada Rifle Association and the Gzowski Medal awarded by the Engineering Institute of Canada. The stamp is issued to commemorate a great Canadian of Polish origin with the hope that it will bring to the attention of the public a man whose contributions have been great but have been largely forgotten. It is also hoped that the stamp will recall the contributions made to this country over the years by a vast number of other Canadians whose ethnic origin was neither British of French.