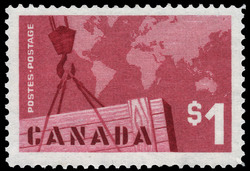 This stamp has a hidden date in the top-right corner. This stamp has the designer's initial in the top-right corner. The initial P belongs to Alan L. Pollock. From the earliest days Canada has been a trading nation. The development of this country was undertaken, in large part, because of its commercial potential in the fur trade. Canada has grown and prospered in the last 350 years and while the trade products are more diversified, reliance on trade has not diminished. Before the Second World War, and to some extent since then, exports from Canada have been largely agricultural goods and raw materials. There has, however, been an increasing emphasis on manufactured goods and products of secondary industry. A large proportion of these goods have been sent to the United States, with a smaller proportion going to Europe, South America, and to the Orient. Since a large part of the national income and major portions of the revenues of many important industries are derived from foreign trade, developments in principal world markets are of direct interest to Canada's economy. The expansion of such groups as the European Economic Community and the European Free Trade Association have treatly affected the traditional trading ties of Canada and have required many adjustments to the changing world economic climate. Canada and the United States joined eighteen European countries to form the Organization for European Co-operation and Development (OECD) which was set up in December 1960. The main objectives of the OECD are to encourage economic and financial growth among member countries, to contribute to the sound expansion of the underdeveloped nations, and to work for an increase in world trade on a multilateral and nondiscriminatory basis. Although Canada's volume of trade, on a per capita basis, has declined considerably , dropping from second place in 1957 and 1958, to third in 1959, and eighth in 1960 and 1961, her position relative to total world trade has remained virtually unchanged during that time with only a slight drop from fourth to fifth position. With the increase in trade markets and the rapidly growing production capacity of nations, the buyers of the world are now able to be more selective and the exporter must constantly work to improve his products. In recognition of the importance of trade this subject was chosen as the theme for the new $1.00 stamp. The Canada Post Office wishes to bring to the attention of the public the necessity of continued diligence in the acquisition of new trade and the importance of keeping those markets which are already ours.