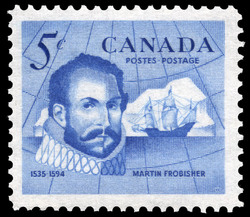 This stamp has a hidden date on the right side of the iceburg. The designer's initial is in the bottom-right corner. The initial W belongs to Ephrum Philip Weiss. Although Sir Martin Frobisher was destined to follow in the wake of other great explorers in his search for the Northwest Passage to the Orient, he was certainly no less adventuresome. Had he chosen to sail a southerly course, rather than into the impenetrable icefields of the north, perhaps the chapters of history would have unfolded quite differently. Sir Martin was born about the year 1535 and raised in Normanton, Yorkshire, England. For a period of some sixteen years, before his ambition was finally realized in 1576, he advocated a search for the Northwest Passage. With the assistance of the Earl of Warwick, Frobisher was placed in command of an expedition consisting of two twenty-five ton ships, the "Gabriel" and the "Michael", as well as a ten ton pinnace. They weighed anchor at Blackwall on the 7th of June. During the crossing, the pinnace was lost in a storm and the crew of the "Michael" turned back. Frobisher, however, pressed forward until the shores of Labrador were sighted on the 28th of July. A few days later Frobisher Bay was reached and the explorers mistakenly thought they had found a strait leading to the open sea. Adverse weather conditions and ice impeded further progress and he was finallly forced to return home. Sir Martin`s exploits created great interest in the commercial world, especially when it was remoured that the "black earth" he had brought back was gold ore. This interest paved the way for the fitting out of a better equipped expedition. The Queen loaned the services of the Royal Navy and subscribed a considerable sum towards the project. Frobisher was then made High Admiral of all lands and waters the might be discovered by him. On May 26th, 1577, the second expedition set sail from Blackwall, Miners, refiners and other skilled personnel were included in the complement of 120 men. Two months later they landed on the south shore of Frobisher Bay and took possession of the land in the name of the Queen. Unfortunately, much of their time was spent in collecting practically worthless ore rather then in the pursuit of further explorations. However, on their return to England consideration was given to the setting up of a third and more ambitious expedition which was to attempt the establishment of a colony as well. On the 31st of May 1578 the expedition, consisting of fifteen vessels, left Harwick. Less that a month later they reached Greenland and in mid-summer, Frobisher Bay was sighted. Once again the ice, made treacherous by the stormy sea, drove the small flee up through Hudson Strait. After proceeding only a few miles up the strait they reached their course and entered Frobisher Bay. Some attempt was made to prospect and to found a settlement but the whole venture proved most unrewarding. On the last day of August, they sailed for home. This ended Frobisher's career as an explorer as his services were employed by the Navy. In 1585 he was placed in command of the "Primrose" as Vice-Admiral to Sir Francis Drake and three years later was knighted at sea for his services in the defeat of the Spanish Armada. Sir Martin was mortally wounded in the seige at Brest in 1594 and died on the 22nd November at Plymouth. This stamp, another in the explorer series, is intended to focus attention on and to promote greater interest in the history of Canada's Northland. Frobisher, by today's standards perhaps a rough and rigid disciplinarian, undoubtedly rates an outstanding seaman and a great naval hero who did much to create interest in the then unknown lands of the North American continent.