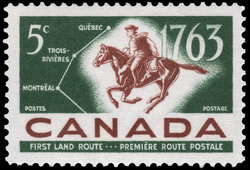 This stamp has a hidden date near the horse's front hooves. The establishment of a regular postal service between Quebec, Montreal and Three Rivers in 1763,formed the nucleus of the Canada Post Office land mail service as it is known today, and established the Post Office as one of the first branches of the Canadian Civil Service. Benjamin Franklin, the Deputy Postmaster General in North America, came to Quebec from Philadelphia to set up the orgranization. There was no general mail service before this time, but Mr. Franklin did find a system of post houses along the post road. These served as a foundation which he expanded and developed. Hugh Finlay, a Scot who came to Canada in 1760, and served as Post Office Surveyor, was placed in charge of the Quebec office. The Post Office made use of horses, runners and boats for dispatch and delivery. Citizens of this area, and especially those who had worked in the old post houses, were requested to give all necessary aid to the new postal organization. Ralph Burton, Governor of Three Rivers and its dependencies, directed that saddle horses should be rented at a fee of six cents a league to carry mail to and from Quebec. Boatmen were to ferry letters and post office personnel. On delivery, the boat captain was paid one cent per letter by the postal clerk. Colonel Burton threatened punishment to those who caused hindrance or delay. There was little mail traffic between the settlements of the colony, later known as the Province of Canada. Travellers, and members of the clergy in particular, continued to carry news from one community to another, as they had for many years. Those who did use the mail service were assessed a fee, payable on delivery. In fixing the amount of this charge, distance and weight were the factors considered. Most of the mail carried between these post offices was to or from Europe, and crossed the Atlantic in mail packet steamer. During the winter months, mail service was halted. For the remainder of the year, the people could depend upon a fairly regular monthly service,