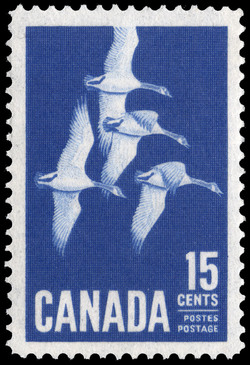 This stamp has a hidden date under the wing of the left-most goose. A scene depicting four Canada Geese in flight has been chosen for the new 15¢ regular stamp to be issued by the Canada Post Office on October 30th. The new design replaces a stamp bearing a likeness of a gannett, which has been in use since 1954. One other Canadian stamp features the Canada Goose, however this 7¢ regular issue is slated for early retirement. In the air, on water, or on land Canada Geese are a beautiful sight. Their appearance is one of the first signs that winter is almost over, and spring is not far behind. The average weight of these birds is nine pounds, while their wing spread has been known to exceed six feet. The Canada Goose is equally identified by its black neck and head, white cheek patches, white "v" at the base of the tail, and greyish - brown body, darker above than below. The number of Canada Geese in North America is estimated to be between one-and-one-half and two million. The majority fly south to the United States for the cold weather. In Montreal and vicinity the geese first appear during the third week in March, and usually a week later in Quebec City area and the southern prairies. Summer is the breeding season for the Canada Goose. The birds build their nests, using any available material, throughout the country, from Newfoundland to British Columbia. The sites vary widely, but are always near open water. With the approach of cooler air in the fall, the Canada Goose leaves the country for which it was named, and begins a leisurely flight south to the warmer temperatures for the winter, to return again in the spring. The stamp which depicts this typically Canadian bird will be used primarily on airmail letters destined for the United Kingdom and Europe. Other uses for it include parcel post and special delivery mail.